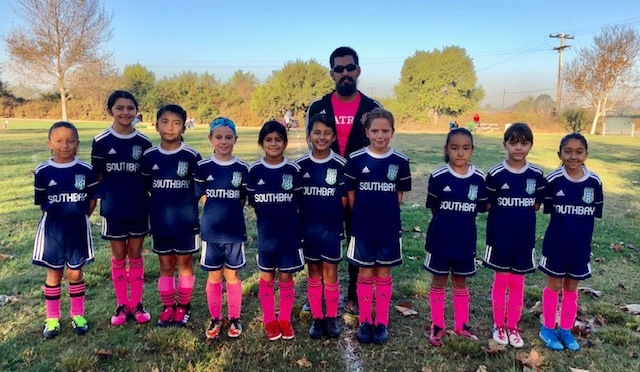 South Bay MATRIX is AYSO’s year-round competitive soccer club that offers opportunities for area youth to enhance their skills in an environment with players of similar ability. We invite you to speak with our coaches and players and learn more about our program.

Players are expected to attend a published tryout session. If you have a time conflict, please discuss this with the Coaching Director.  Late arrivals will be admitted at the discretion of the South Bay MATRIX Staff. Players must wear their soccer gear.  Shin Guards are mandatory. Bring a water bottle. A Parent or Guardian must accompany all players and they must sign an AYSO insurance waiver.

For more information contact our DOC Polo Aviles @ 858-336-8529 or sbmfcpoloaviles@gmail.com

Hours and hours of practice and hard work culminated November 17 with the conclusion of the Presidio League season for all olders and youngers teams. There were quite a few highlights for our league. But it all starts with our volunteer coaches and team managers. I want to thank each for their time and dedication to our youth this season. Of the 8 teams we had entered in the Presidio League, 2 went undefeated in AA-C, and another finished second in AAA–good enough to earn a Premiere seed. As a club, we finished with 19 more wins than losses. We have had several years in a row with more wins than losses. That speaks to the quality of AYSO teams in the competitive club environment of Presidio. We have accomplished all this at a fraction of the cost of other clubs.

I am especially proud of the fact that we went through the whole season with only 1 red card. Special congratulations go to Coach Hector Ordonez, whose U14G team went 8-3-3 in their first season in AAA, good enough for second place in their bracket and a Premiere seed. The Ordonez team showed you can build Premiere caliber teams with players right here in our own league. His team was ‘homegrown.’

South Bay AYSO Matrix teams are truly about player development. We don’t have to recruit or ‘steal’ players from the North County. We simply need to retain and develop the talent right here in our own backyard. This is a contrast to clubs that talk about player development, but what they really mean is they do not have talent in their own neighborhoods and so must recruit from South Bay.

Our ‘Outstanding Matrix Volunteer’ is Coach Santiago Villanueva. Every week of the season, Santiago and his family striped the fields for our program at Nestor Park and Southwest High. They would have done Mar Vista Middle, too, if it were not for flag football on Fridays. As the high school soccer season approaches, our older divisions are seeing player after player make Varsity Womens’ soccer teams, which is a credit to their development under Coaches Romo, Villanueva and Ordonez.

Finally, let me express my gratitude to Coach Diego Terry and Coach Marco Meza, who worked with training our teams and coaches and have made a huge impact on our program. We look forward to adding 2-3 more teams to our Matrix program next season. Our focus is on quality growth. For now, have a great Thanksgiving and good luck to our teams that are competing in the Presidio Cup this December!