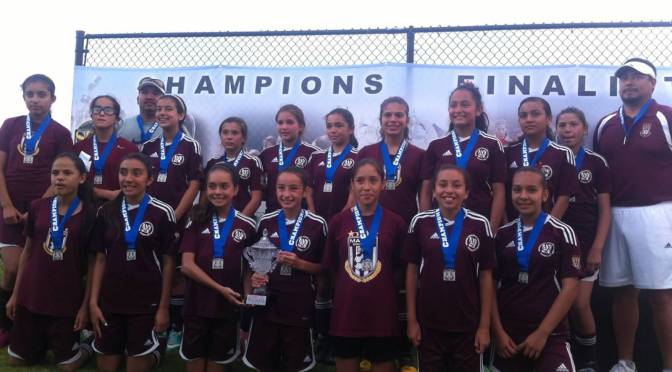 South Bay only entered five teams in the Memorial Super Cup. Yet three of those teams made the finals, and U12G Red academy won it all. For the U12G team, it was their second consecutive weekend at the winner’s podium. Coach Polo Aviles’ squad crushed the competition on the sand and on the pitch. Coach Polo says his team is looking forward to a step up in competition in the weeks ahead. Our other South Bay finalists included Coach Trujillo’s team in U9G, Coach Villanueva’s team in U12B and semi-finalists Coach Romo’s U10G team. It was a good showing by our club, and preview of success to come.

South Bay teams have a strong record in beach soccer. In addition to the U10G success, the South Bay U13G team coached by Hector Ordonez made the semi-finals in its age group in the Oceanside tournament, only a week after capturing the Beach Soccer Jam tournament at Fiesta Island.

For the Oceanside tournament, each South Bay team was entered into the highly competitive ‘Sun’ bracket. The South Bay teams trained on the sand in Imperial Beach to prepare for the Oceanside tournament. The girls’ hard work paid off in dominant performances in the Sun brackets’ opening rounds. The U13G team (photo at right) scored an incredible 24 goals in its first three matches, including a convincing 7-2 victory over rival Kodiak. The Ordonez team narrowly lost in the semis, losing 4-3.

The U10G team recorded 16 goals in its first two matches, before smashing Surf in the championship match. For the U10G team (feature photo), it was a second title in three years in this tournament. And defeating a team from Surf, with its cadre of professional coaches and trainers, is another feather in the cap of all-volunteer AYSO, and South Bay soccer specifically. Way to go!