South Bay’s G2002 team fell 1-0 to Las Vegas on Sunday in the championship match of U.S. Youth Soccer’s Far West Presidents Cup. But the South Bay girls won anyway. They won our hearts. And on the way to playing its sixth match in as many days in Salt Lake City, Utah, the team struck a blow for AYSO competitive teams everywhere. Coach Polo Aviles and his 16U squad are believed to be the first AYSO-affiliated team to advance so deeply into regionals. The girls showed “Dad Coaches” are winners indeed. They do it for love of the game, not a paycheck. On Father’s Day, what more beautiful message is that? Congratulations, Coach Polo and South Bay girls. You made us proud. #MadeInTheSouthBay, and @CalSouthSoccer reigning 16U State Cup Champions. @AYSO_Soccer @sdutzeigler 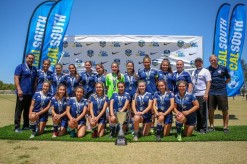